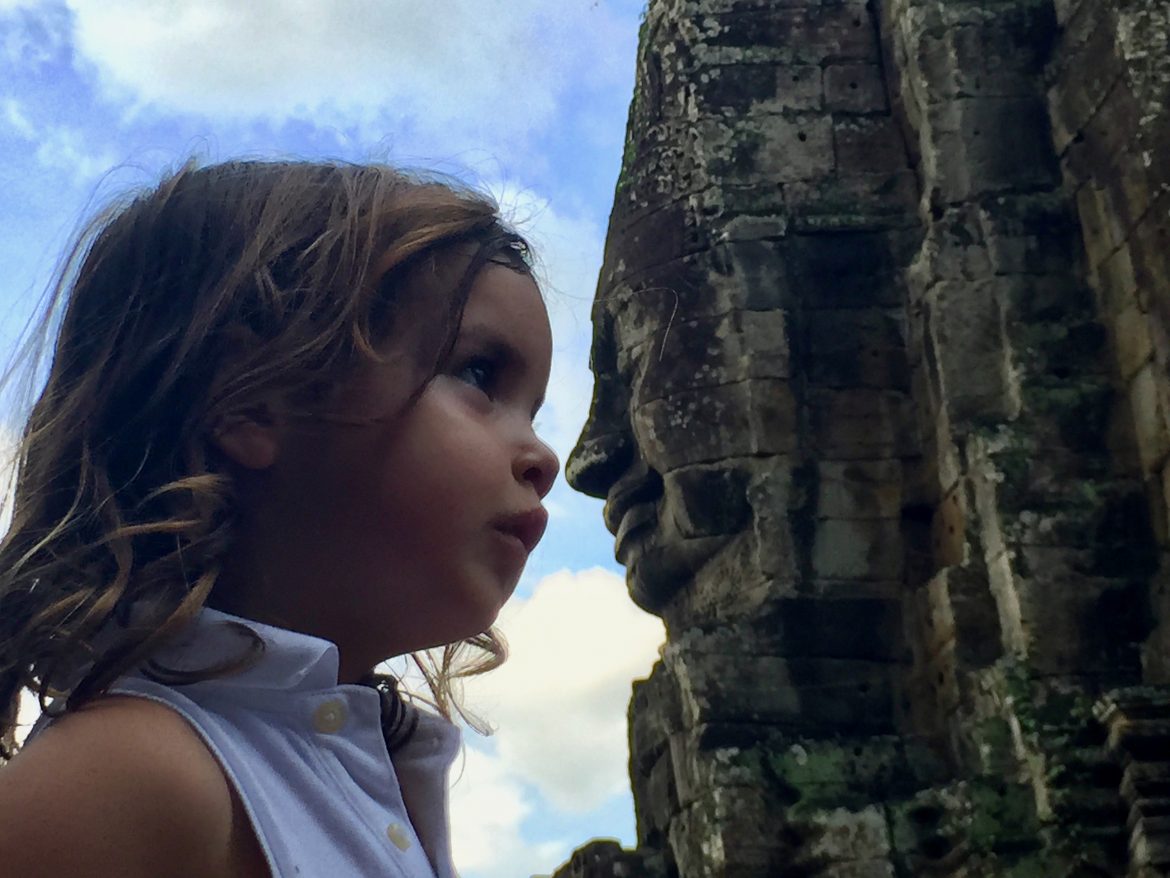 A bit about Siem Reap 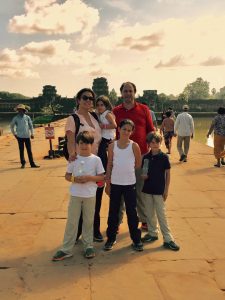 Sieam Reap, a place I had been longing to visit for such an incredibly long time. We arrived to Siem Riep from Da Nang, Vietnam and the immigration was actually quite a procedure. Having to buy a VISA upon arrival standing in a very long queue to await your turn. But when we got through immigration and arrived at the luggage belt, our luggage was already awaiting us. As the airport is so small, everything past the immigration procedure goes pretty swift.

Of course the biggest attraction of Siem Reap is the Angkor temple complex. The biggest temple complex in the world is almost 1000 years old. The most famous temple of all is Angkor Wat. The five towers of Angkor Wat form the symbol of Cambodja. 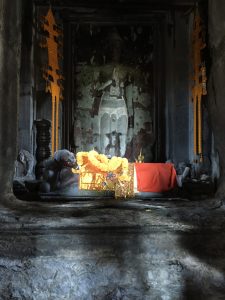 Such a mythical place

One advise, take your time visiting the temple complex. There are so many beautiful temples to see. We visited the most important and well known ones. Like Ta Prohm, the temple where Tomb Raider starring Angelina Jolie was filmed. We watched the movie with the kids before visiting the site, to make it more fun for them. Sometimes you have to abandon the seriousness of history first to get them interested, once there we always tell the real history and often beautiful stories accompanying the history.

We also visited Bayon, the famous 54 tower temple of the 54 provinces in ancient times. Each side of the tower has a face, so 4 faces in total per tower making a total of 216 faces. Lots of fun pictures can be made at this temple, including the “Eskimo kiss” photo, a must have of course.

Lastly we visited Preah Kahn temple, at the time we were visiting, it was a lesser known temple so not many people were on sight, which made it a very nice one to wander around and imagine what life would have been like in those days.

Siem Reap has become such an immensely popular tourist destination both with back packers as more high end tourist that there is a very large range of accommodation choices. Traveling around town is very easy as many tuk-tuks go around town.

Here are some awesome things to do in Siem Reap with kids. If you follow this list you will for sure see all the major highlights of this wonderful city. Use it as a check-list. It works really well. 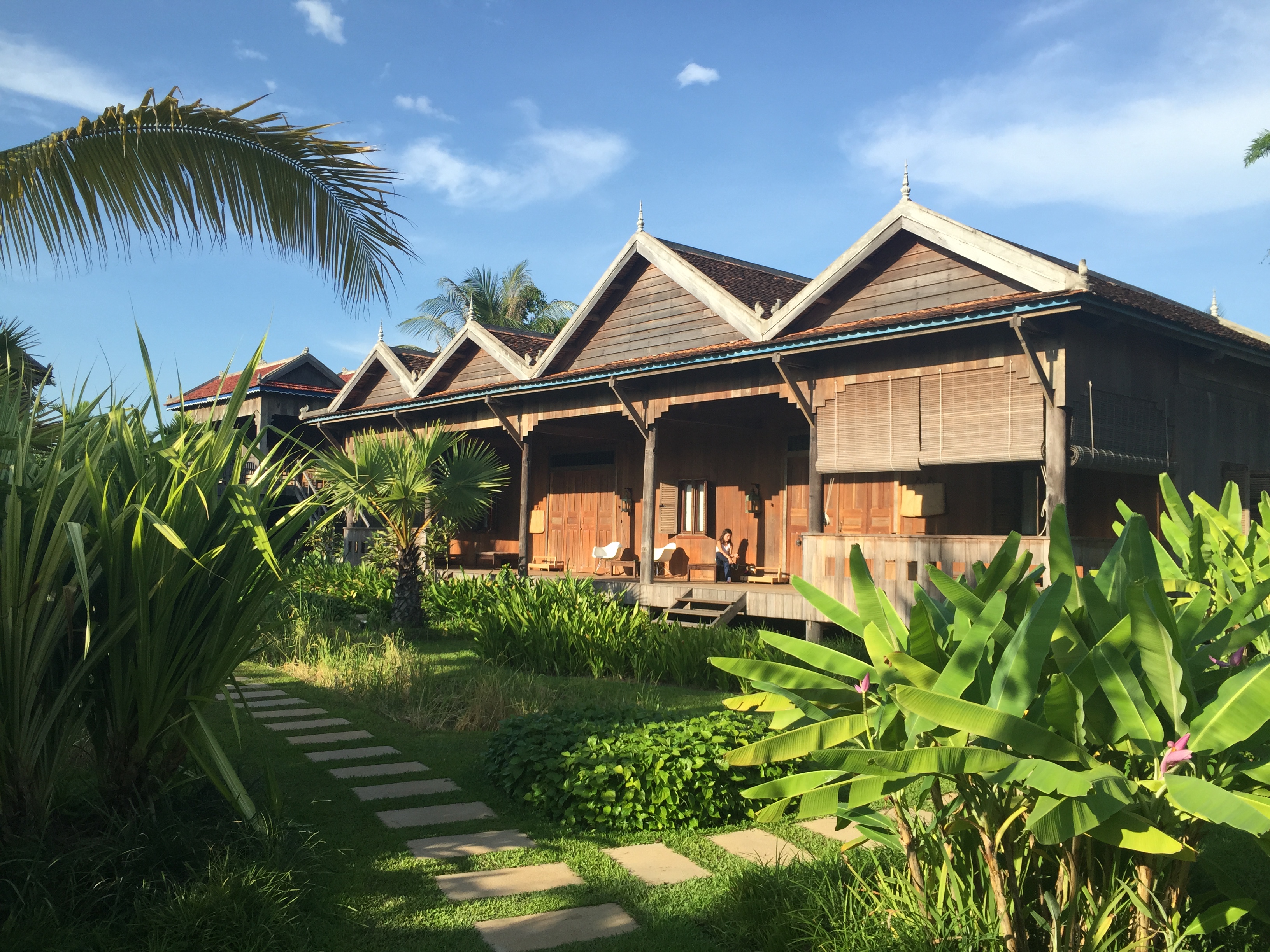 Sala Lodges is located about 8km from the Angkor Temple complex. The 11 houses hotel is also just outside the town of Siem Reap.

As we always want to be close to the children we booked the Pi & Bei house (meaning number 2 and 3). The house is ideal for a family. With 2 (connecting) bedrooms sleeping 6 persons in total. The house was built in 1962 and owned by a General. It served as a military base for soldiers, but as it got too cramped the General sold the house to the hotel in 2011.

The hotel has a very nice small restaurant serving breakfast, lunch and dinner. The food is very good, with French influences. Although we didn’t stay in at night to have dinner we did enjoy the good breakfast and lunch they serve. 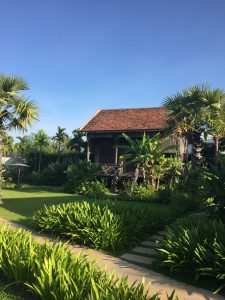 One of the charming typical Khmer houses

The hotel was the perfect hideaway for us while in Siem Reap. It is a typical boutique hotel with only 11 rooms (houses), well kept and the staff is extremely friendly and helpful. The rooms are very authentic and have all the amenities you need. The decoration is simple but nice. Upon request (without extra charge) the hotel can provide baby cots and flat screen tv’s.

The kids loved spending time at the pool. A very welcome break from the extreme heat in Siem Reap. There is a nice little bar by the pool serving cool drinks. It’s all just perfect!

The best time to visit Siem Reap is from November to April. We visited in November and we did have some rain. Temperatures are a little lower from December to February and least rainfall is December and January.

Below is the current temperature and forecast for the next days in Siem Reap, decide for yourself if it’s tempting or not.