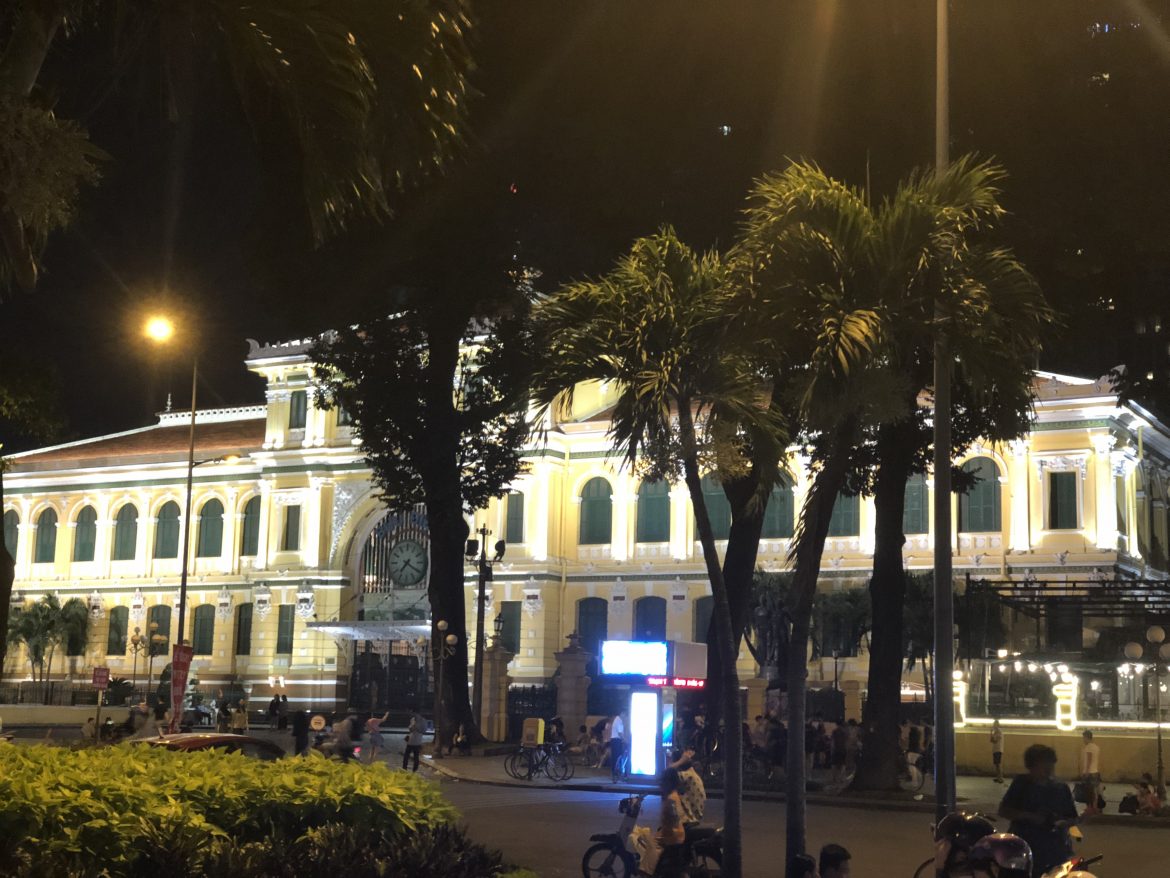 Ho Chi Minh City, formerly known as Saigon.  But actually the Vietnamese still call it It’s a modern, vibrant city and also the largest of Vietnam with more than 4,5 million inhabitants. The city is less authentic than most other Vietnamese cities. It is much more western than, for example, capital Hanoi.

Ho Chi Minh is the perfect place from where to visit the Chu Chi tunnels. The Vietnamese army used these tunnels during the Vietnam war as a hiding place but also as a point of attack against the American army. The tunnels are very narrow and you should certainly not enter if you are claustrofobic.  There is a museum surrounding the tunnels however, so even if you don’t want to enter the tunnels it’s very interesting to visit this place. The children did go through the tunnels easily with the Vietnamese guide and they were very impressed. We rented a speed boat and went over the river to the tunnels. This saves you a lot of time, but is of course much more expensive. For us it was worth it, because it’s a beautiful trip and it gives you an opportunity to see the  river life and enjoy the scenery.

Another must do in Saigon is the Vespa Streetfood tour. You can do this with your children as well. Everyone gets a driver, so no one is allowed to drive on a scooter him/her self. But still you just feel like a local while you cross the city on your scooter, together with thousands of other people. The warm wind in your hair enjoying the highlights of the city. It’s perfectly safe to take the children as well. The drivers are very kind and responsible and they will adjust the tour to fit your children’s needs. For example, in stead of ending at the local bar, we ended at the ice cream parlour where we had 28 scoops of ice cream! A feast for the kids.

Another cool thing to do is vist the War Museum. It’s a very small museum and mostly features American army tanks, airplanes and helicopters. But it is very interesting to see it from the Vietnamese perspective. One part of the museum is not suitable for young children as the war prisons and the torture practices are being explained not only by words but also with pictures. It can be too confronting and cruel for the younger ones.

Another nice thing is to visit is the market where you can buy very nice souvenirs. Don’t forget to bargain the price. It’s common practice in Vietnam. Even the kids negotiated on the prices of the gifts they were buying their friends.

Ho Chi Minh city is actually more of a modern version of Vietnam. It’s not really interesting sight seeing wise, but still it is dynamic with lots of Vietnamese influences such as the tons of scooters, the people eating streetfood along the road, the smells and bustle on the street.

Here are some awesome things to do in Ho Chi Minh City with kids. If you follow this list you will for sure see all the major highlights of this wonderful city. Use it as a check-list. It works really well. 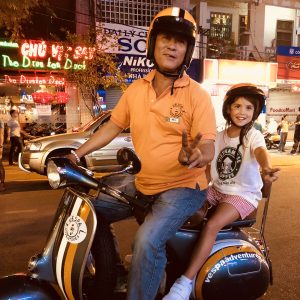 One transportation tip when in Ho Chi Minh City. Always take a Vinasun Taxi. They are one of the few reliable taxi agencies. Others are fake as the Vietnamese say themselves. The number to call is 38.272727 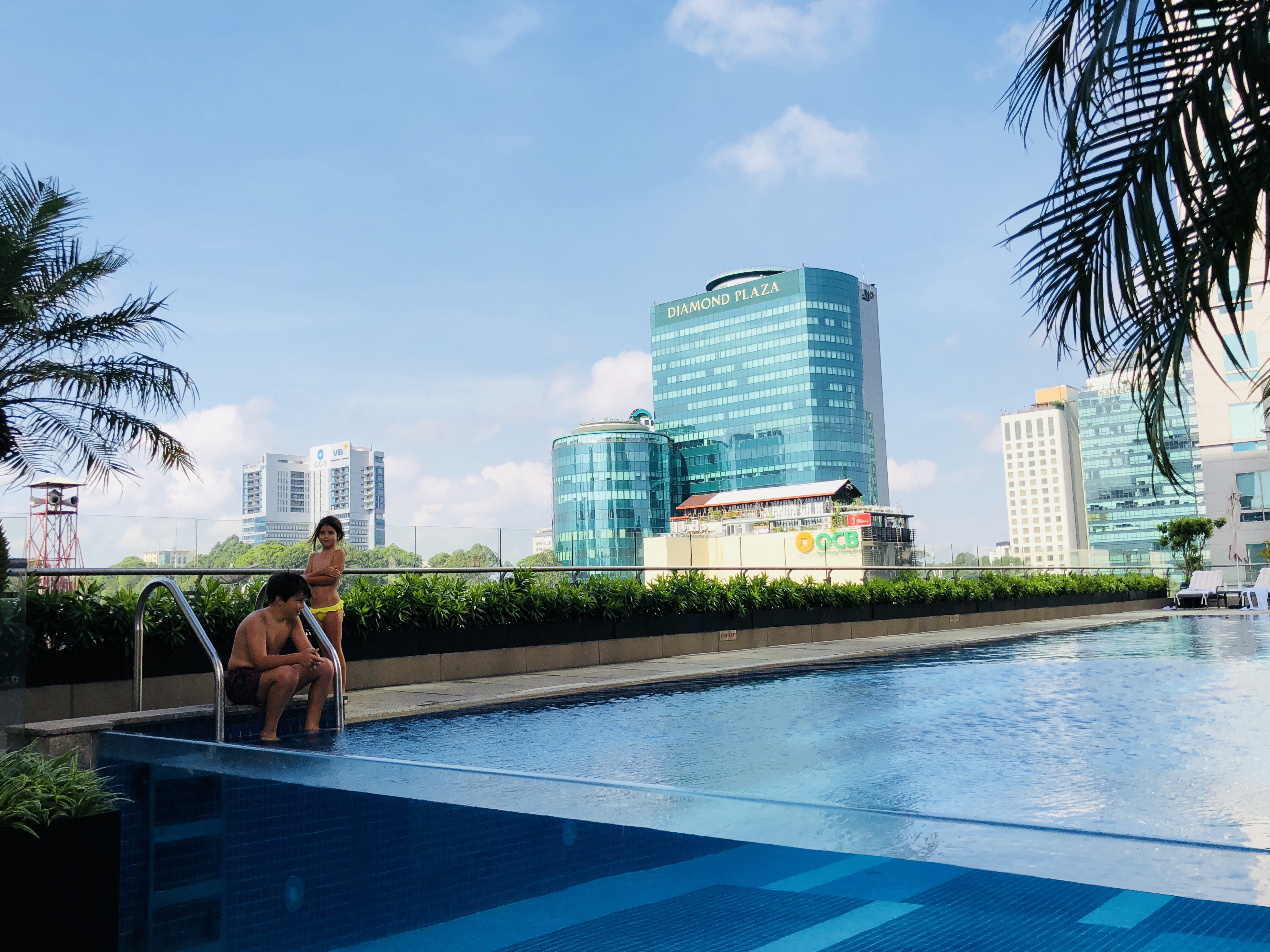 In District 1 of the city center. Close to the Notre Dame, Post Office and all the restaurants and bars. About 30 minutes from the airport (with traffic). Without traffic it will take you about 20 minutes.

It is a standard business hotel in a city. But it has been awarded as Vietnam’s Leading Hotel by the World Travel Awards. So it is absolutely a good hotel for a stay in Ho Chi Minh City. We always book connecting rooms but as we are valued members of the IHG group we always get an upgrade to a suite with a connecting room. The double beds can sleep two younger children, it is possible to add one extra crib or bed to the room.

The hotel has several restaurants but apart from breakfast we didn’t stay in the hotel to eat. The breakfast buffet is fantastic! They have everything you could wish for. And everything is well presented and fresh. There is a Starbucks located next to the hotel for coffee, although the coffee in the hotel is very good as well.

Services and amenities for kids

The rooftop pool at the Intercontinental Saigon

We stayed here two times already. The hotel has very good service for loyal guests and if you are a valued member of the IHG awards program. The rooms are spacious enough and provide all modern amenities. It is centrally located in a nice area of Ho Chi Minh city.

The kids love the rooftop pool and if you like to work out there is a fantastic gym located next to the pool. Staff is kind and helpful. The concierge can arrange activities for you while there. 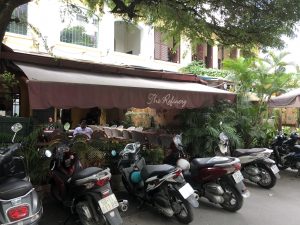 Secret passage leads you to the Refinery

Address: 74 Hai Ba Trung Q1, Ho Chi Minh City
Reservations:  +(84) 28 3823 0509
Website: www.therefinerysaigon.com
Cuisine: Bistro and wine bar
Kidsmenu: yes
Experience: Located in the Old Opium Refinery of Saigon. This nice little restaurant, one of the most popular in Ho Chi Minh, offers continental food. Although you are in Vietnam, it sometimes is very nice to have western food. This is a very nice place to have some mostly French bistro inspired dishes and good wine or cocktails. 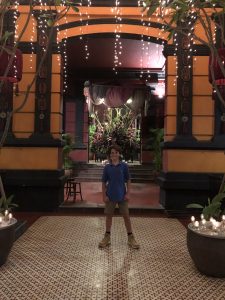 The entrance of the Nha Hang Ngnon restaurant

Address: 160 Pasteur, HO Chi Minh City
Reservations: +(84) 28 3827 7131
Website: –
Cuisine: Vietnamese food
Kidsmenu: yes
Experience: The surroundings are great and the restaurant is extremely popular with both locals as well as foreigners. It offers a wide range of street food with dishes from Vietnam, Thailand, Japan and China. Atmosphere wise it is a nice restaurant to visit and not expensive, but our experience of the food was not great, maybe we had a bad night, but I wouldn’t recommend going there for the food.

Actually anytime of the year is a good time to visit Ho Chi Minh. The city is famous for its pleasant climate. The dry season is from December – April, this  is also the hottest time of the year. The monsoon season is from May-November. It is quite humid during that time of year. But it usually rains only during the day and it doesn’t last very long.

Below is the current temperature and forecast for the next days in Ho Chi Minh, decide for yourself if it’s tempting or not.